TO MEASURE SHARKS AND OTHER MARINE ANIMALS

Our green lasers are used by research groups to measure whale sharks and other live marine animals.

Measure live fish underwater
or sunken ships, coral heads or anything else

Oceanco Green Lasers are the laser of choice for marine research groups all over the world.  See Videos of the lasers in use.

When you look at the following videos, notice how the lasers are used to place two dots on the fish.  The pictures are later analyzed and the distance between the dots is extrapolated to the distance from the front to the back of the fish.

Some links to information about whale shark research:

One of the researchers in the world wide effort to save the whale sharks is Alessandro Ponzo, located in the Philippines. Here is a short note from him to us explaining the efforts of these researchers.

=======================================================
Hey Barry.
Unfortunately the whale shark are still exploited in Asia for meat and fins.
They move continuously and we think there is only one big population in the Pacific-Indian ocean with animal of different ages going in different places. (age and sex segregation)
Very little is known about this species because they are very hard to follow.
There is an international library and software on line (ecocean) created by Australian researchers.
http://www.whaleshark.org/   (here is all the info you need)
We all (world-wide) upload our pictures on line, so that the software can recognize it and tell us where and when the animal have been seen before. Every whale shark has a different spot patterns and a picture of the left side of the animal just behind the gills is used for photo identification.
We use the laser to estimate the total length of the animal, mainly for aging purpose. Researchers in Mozambique just found a relationship between the distance between the gills and the dorsal fin to the total length of the animal.
So basically with a photo of the head we can measure the total body length and more or less estimate age and sexual maturity.
Attached are some pictures of our frame. Screw are for fine tuning of the parallelism of the laser. Have to tested yet. I'll let you know in 2 weeks.

A photograph of this grouper taken with the green lasers operating shows the two dots on the side of the grouper.  Knowing the distance between the lasers will allow us to easily figure out the size of the fish without ever touching it.

Here is a simple type of mount made to hold the Oceanco Shark Green Lasers to measure whale sharks.Without a camera mount on the bar it would require two divers, one to hold the bar and antother to take the picture. 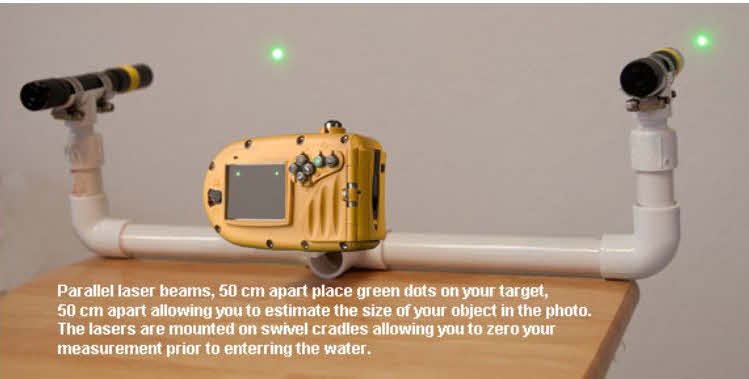 The device in the picture to the left was custom made by Oceanco. for scientific research. It is currently being used by scuba divers in the Pacific Ocean to measure whale sharks. It holds two green lasers. It will take any standard camera on its universal camera mount. green lasers used to measure whale shar
!
Mobile mode
To create online store ShopFactory eCommerce software was used.